On April 13th, a botanist contacted China Biodiversity Conservation and Green Development Foundation (CBCGDF) that he has taken notice that information pertaining to resell the national plant golden retriever dog fern (Cibotium barometz) is easily available on major e-commerce platforms. Online sellers are scattered in over a dozen of provinces and cities like Guizhou, Fujian, Sichuan and other provinces, Guangxi Zhuang autonomous region, Guangzhou, Hangzhou, Qingyuan and other cities. The E-Commerce Environmental Responsibility Working Committee of CBCGDF actively calls on the three major E-Commerce platforms to fulfill their responsibilities to protect the environment and to swiftly remove the nationally protected plant off. 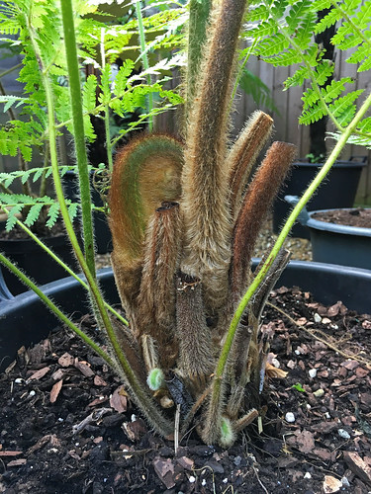 The golden retriever dog fern is not familiar to most consumers. It is on the list of the National Second-class Protected Plants. Its origin date back to the Jurassic and it is dubbed as the “living fossil” in primitive forests. The plant has a thick stem and fuzzy petiole and grows to a height of 3m when erect but is often prostrate. Experts contacted the local forestry police but are informed by the county department that the case is beyond its duty.

Sellers of woolly fern are easily approachable when inputting the name of the plant on an e-commerce giant. Some merchants purposely advertise the plant by using eye-catching words like “precious” and “rare”. The e-commerce platform also facilitates the spread of a large amount of information about wildlife trading. The Internet becomes the shelter for national protected plant trafficking. Some inappropriate information has been removed from the Working Committee’s tip-offs. However, consumers can still find wildlife products online.

China is one of the richest countries in biodiversity. The amount of higher plants has reached to about 30,000 species, 5 percent of which are endemic species, and ranks the third place following Malaysia and Brazil. But the plant diversity is instantly decreased under multiple influence factors. Over the recent 50 years, nearly 200 plant species have gone extinction, and 4,000- 5,000 higher plant species are threatened, accounting for 15-20 percent of the totality (much higher than the world average of 10-15 percent). Unreasonable and excessive production activities undertaken by human beings have endangered the destiny of other life on the earth. Plants closely related to human life cannot be immune from it. To conserve endangered plants is a matter of great urgency. Sadly, the awful reality that lots of plants are on the edge of extinction is not obtaining enough attention. The protection of plant germplasm resources is of profound significance to maintain plant diversity.

China is a contributor to the United Nations’ Convention on Biological Diversity. In the era of Ecological Civilization, China still lacks laws for referring and enforcement. According to botanists, it takes billions of years for a plant species to evolve, but it is as easy as winking to eradicate the species from nature. Some estimate that each extinction of a plant species may subsequently lead to the loss of 10-30 species. The result is inconceivable. The rapid biodiversity loss should be curbed with instant and effective actions. The E-commerce platform, serving as the main driver of illegal wildlife trade should fulfill its responsibility to improve the conservation of biodiversity and fulfill the vision of the Ecological Civilization-coexistence of humans and nature. Therefore, the E-commerce Environmental Responsibility Working Committee of CBCGDF appeals E-commerce and online platforms to attach importance, actively carry out the duty of wildlife conservation, and to contribute to securing public health. Relevant authorities should strengthen law enforcement and unswervingly combat illegal wildlife poaching, smuggling, and selling.